I remember 18 months ago sitting in my living room and watching Jess Tappin compete in the Commonwealth games in Glasgow. I now see her modelling products for sports shops, on billboards and I even have seen her on top gear! This week I had the pleasure of learning about her journey to becoming a professional athlete and I am delighted to be able to share it with you.

Jess’s passion for sport was inherited from her parents given her parents were both from sporty backgrounds, her mum playing waterpolo for Great Britain and her father playing football for Birmingham and Chelsea. Despite this Jess chose neither football or waterpolo but dancing. From as early as she can remember she was dancing, doing every tap, modern, jazz and musical theatre class her parents would take her to. Growing up as a dancer Jess used to imagine herself as Darcy Bussell that some of you might know as a judge on Strictly Come Dancing. Jess would watch Bussell on the TV and dance around the living room pretending to be her. This was where Jess first identified her passion to be the very best, she wanted to be like Bussell but better. Jess continued to dance into her teens having spent many years at the Ceccetti Associates dance school in London.

Athletics was not something Jess had given her full attention to, at 16 the girls in her dance classes were becoming unpleasant and she found athletics more enjoyable because she wasn’t just competing with the girls, she was able to train with the boys and beat them too. This proved to Jess that athletics was the route for her.

“When you are good at something it is always more fun! I loved the feeling of beating the other girls… and beating the boys too is always a confidence boost!” 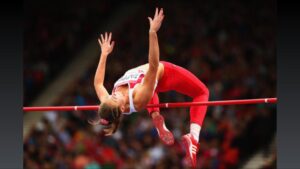 After attending an athletics master-class Jess found out she was particularly good at high jump and hurdles and enjoyed doing various events so she attended her first indoor pentathlon (5 events) against everyone in the South of England for the under 17 age group. Whilst eagerly awaiting her coach to turn up to give her the confidence boost she needed in her first National competition it soon dawned on her, as the start was rapidly approaching that he wasn’t going to turn up. Despite not really knowing what she was doing and having no coach there to support her, Jess went on to win the competition!

Having spent many years as a dancer looking up to and trying to emulate Darcy Bussell, Jess adapted her role model to her sport accordingly, after watching Carolina Klüft win a Gold medal at the Athens Olympics, going on to win World Championships for heptathlon in Helsinki and Osaka she instantly became her new idol. For those of you that might not know Klüft she is a Swedish Olympic gold medallist, with a unique approach of psyching herself up before each event.  Jess used to practice Klüft’s pre event ritual in front of the TV Watching her slap her own face, legs as well as shouting at herself. To this day mimics her idols ritual before all of her events.

Something that was very clear whilst speaking with Jess was her passion to be the best. She told me how she gives it 100% whether it is in training or competition. As a heptathlete the last event is the 800m race, this can make or break your result. She imagines every run she is doing as if it is the last 100m of her 800m competing for an Olympic gold.

Jess’ training didn’t really take off until she was in her 3rd year of University in Loughborourgh. Despite being at one of the best sports unis in the country because Jess was not funded by British Athletics she found it very difficult to get the appropriate coaching so much so she stopped athletics completely and took up cheerleading. In her second year was missing athletics and took it up again and this time approached someone who was willing to help her. 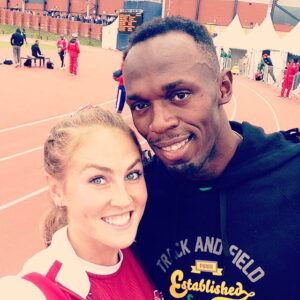 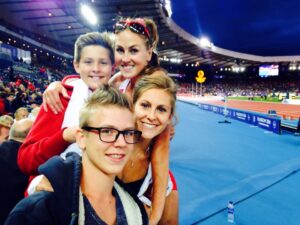 Jess’s determination is immense and a test of her determination is when she gets injured, she has had 5 stress fractures but she was tested most when she was knocked off her bike whilst riding to work, 8 months before the Commonwealth Games she had been training 2 years for. Jess suffered a tear to her knee ligament, shifted shin bone and lost complete stability in her knee. It took her 5 month of rehab before she could train again, her first training session back while doing shot putt she sprained her ankle, as a result she missed the May 2014 qualifiers for the Commonwealth. At this point she was angry, upset, frustrated but maintained the view that somehow some way she would still compete at the home Commonwealth Games.

Jess found out 2 weeks before the Games that she was selected to represent England for the Heptathlon.

In July 2014 Jess’s dream came true as she competed in our home Commonwealth Games in Scotland and finished a very respectable 6th for her first ever Commonwealth games.

So what’s next for Jess. 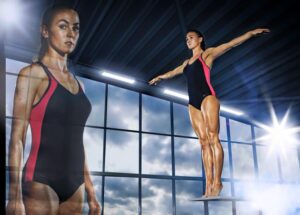 She has moved her entire life from Essex to Liverpool to be able to train with coach Mike Holmes alongside Katarina Johnson-Thompson, Jess Taylor. When she’s not training she is an ambassador for DBA Sports. and has a successful modelling career represented by W Model Management. Jess has worked on campaigns for Freya Active, Asics, Adidas, John Lewis, Sports directs, Visa, and many more, and continues to fund her athletics career in doing so. Jessica was also successful in defeating the Nissan GTR sports car in a 100m race with Top Gear’s James May behind the wheel, at the Clarkson, Hammond and May Live Show at the 02 arena.   (Click here see video below)

Her goal is to complete in this year European Championships followed by Olympics in Rio. Her ultimate goal is to win gold at an Olympics! I wish you the best of luck Jess let’s hope you can do it this year in Rio!

What I learnt Monday evening is that this young woman is a visionary with an incredible attitude. She literally will do whatever it takes to be the best, from copying what top athletes do before an event to picturing herself in second place even when she is winning. Most importantly Jess is an incredibly humble person.

I hope this gives you an insight to some of the traits of one of England’s finest.