If you think of all the great leaders of all time, many have spoken about the importance of starting with the end in mind.

Napoleon Hill referred to it as the chief aim. Aristotle often referred to the Telos, which originates from the Greek word meaning end or goal. It’s been described in so many different ways: mission, vision, purpose, calling, master plan, divine design, there’s lots and lots of different names for it.

I like to use the term North Star. The reason for that is because, for centuries for a millennium, we’ve used the North Star as a guiding light.

To my knowledge, nobody’s ever been there and the goals that I encourage people to set are goals that are so big, that you never actually achieve them. A lot of people think, well, that’s crazy.

“Why would I want to do that? Because then I’m never going to feel happy that I’ve achieved my goal.”

Like I mentioned the North Star is a guiding light. It enables you to create a trajectory from where you are now to where you’d like to go.

One of the best ways that I’ve ever heard anybody describe why having an end goal is so important is by Tony Robbins, who if you’re reading this you may be familiar with, and he defines not having an ultimate goal as having Niagara syndrome.

“Life is like a sprinting river, where most people jump onto the river without ever deciding where they want to end up. They set off on a journey without even a little spadework and in a short period of time, they find themselves caught up in the current affairs, current fears, current challenges.

When they come to a fork in the river, they don’t consciously decide where they want to go, or what is the right direction for them. They merely go with the flow, they become part of the mass of the people who are directed by the environment instead of by their own values. And as a result, they feel out of control.

They remain in this unconscious state until one day, the sounds of raging water awakens them, and they discover they’re five feet from Niagara Falls in a boat with no oars. At this point, they say, oh, shoot, but by then it’s too late”

By having your North Star, it enables you to make better decisions that are going to serve you for the long term. When I explain about experiences a bit later, you’ll understand the reason why.

The biggest mistake I see people make is they only set yearly or 3 year goals. And the worst thing that can happen is they achieve them.

Now you might be thinking this seems odd. How can achieving goals be a bad thing? Well, see the image below. 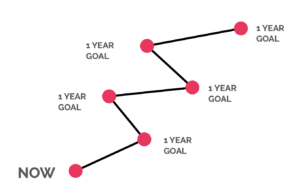 If you achieve things each year then you can pinball and find yourself being extremely unfulfilled setting, and achieving goals with no real sense of why or with any direction. This is what then leads to unfulfillment and/or frustration.

I like the idea of setting an ultimate goal in life so big it may never be achieved or as I like to call it a North Star.

People don’t ever get to the North Star as a destination but they use it to guide them.

Disclaimer: The key here is to not get your satisfaction from achieving the ultimate goal/North Star but to get it from the process of working towards it. 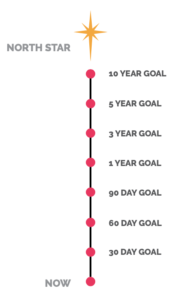 The importance of doing this is you are creating a trajectory toward what you most desire.

Think about when a pilot flies an aircraft from London to New York as an example.

They know where it is taking off from and where it needs to get to so they plot the whole journey as a trajectory to make them arrive there efficiently and effectively.

They may end up flying as much as 95% off of the planned trajectory due to things like wind and weather etc. however the key is they are constantly making tweaks along the way to get to the end destination.

You will do the same with your own success path that you are creating.

What is the North Star (ultimate outcome) that you really want?

Write it down, go crazy here There are no limits.

Why do you want these outcomes?

Now that you have written the outcomes you want. Why do you want them?

This is a powerful process and doesn’t have to all be done in one hit. Once it is done it is a working document that you can continue to update.

p.s. if you would like to get a bespoke report that will identify your personalized key areas of improvement so you can achieve lasting fulfillment, fast click here.