This week the UK has become obsessed with Black Friday, there are videos and photos all over social media of people rushing to shops to get a bargain, my favourite picture was this one: 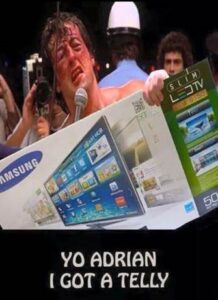 Thanksgiving was originally celebrated as a day of giving thanks for the blessing of the harvest and the preceding year. I think it’s a great thing that our friends across the Atlantic celebrate giving thanks. Having spent Thanksgiving and a Christmas in America I can honestly say the day is as big if not bigger than how we spend Christmas Day in the UK, in my opinion.

Giving thanks and feeling gratitude will change your whole perspective of a situation no matter how bad it seems yet a lot of people will focus on what they don’t have or what they haven’t achieved yet.

I will give you a typical example of how a certain situation that most would see as a negative can be turned into a positive simply by being thankful.

Imagine you are driving down the road, get pulled over and are given a speeding ticket, no one likes them as you know it’s going to cost you money or even worse your licence, so as a result you blame the police officer because you were ‘just over’ the speed limit or the police officer was hiding in the lay by. The fact is, it was you who was speeding. Everyone makes mistakes and as a result deem it to be a bad thing that happens to you. Instead you should think of 10 things you can be thankful for as a result of receiving your speeding ticket. It will leave you feeling much happier if you look at the things you can be thankful for, if you don’t it will be you that suffers the pain and the consequences of the bad stuff anyway.

So lets take the speeding ticket as an example what 10 things could you be thankful for:

So as you will see even in a circumstance that you would normally deem a negative there is always something to be thankful for.

As an exercise think about one of the things that went wrong this week and write down 10 reasons why you are thankful it.