Last year my good friend Adam said “I know what would be a brilliant social media profile picture for you Will, you on a mountain with a Make It Happen flag”.

I instantly agreed, suggested climbing to the summit of the highest mountain in western Europe which stands at 4808 metres (15,774ft), Mont Blanc and then asked him if he wanted to do it with me in which he replied “yes of course” so I added it on to my 2017 goals list.

Three months ago I called Adam and said “I’m booking our Mont Blanc climb, you’re still up for it aren’t you?” after a long silence he replied “ermmmm, not this year how about next year”.

My dilemma was it was one of my 2017 goals and if I say I’m going to do something, I do it so I booked my trip for 1 with Icicle Mountaineering!

I’ve never climbed a mountain, I’ve skied down plenty and I have ran up and down a local hill a few times but that’s about as far as it goes.

But I was willing to take on a new challenge as I knew there would be lots I could learn.

I’m however obsessed with learning and growing myself because if you don’t grow you die and I believe achieving anything in life is 80% mindset and 20% skills & mechanics. 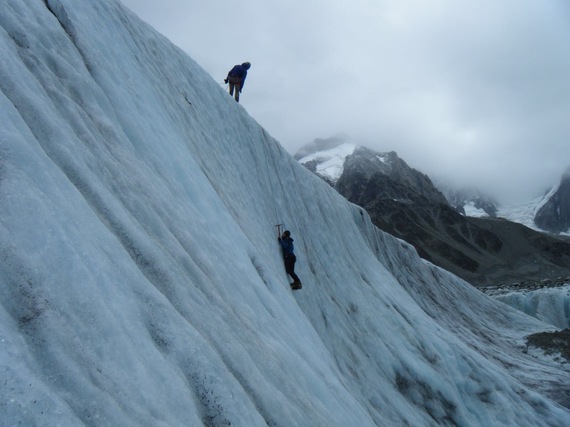 Aside from needing to learn some new skills like using an ice axe and walking in crampons – skills I’m sure will come in handy living in Essex, winter is coming after all (or so I keep being told by John Snow and co!) but the two main skills required were walking, which I feel I have mastered over the last 28 years or so and a basic rock climbing/scrambling ability which I had thanks to my early teens spent climbing trees in a nearby field!

So off I went, on a 5-day trip that would see this 5ft 8 Essex boy become the tallest man in western Europe via climbing the most dangerous mountain in the world as defined by recorded fatalities.

There were 6 main lessons I took from doing this and I truly believe that they are very relevant enabling you to live a more accomplished life.

If you don’t grow you die, there is no plateau and when you get comfortable being uncomfortable you’re forever growing. Climbing a mountain offers a high level of discomfort alright! For me that was in the form of 6-10 hours a day of almost non-stop trekking and climbing, temperatures as low as -10, waking up at 2.30am to start climbing again to make summit for sunrise, not showering and the list goes on.

In life we must be continuously be leaving our comfort zone, trialling and testing new things to get to new heights – pun intended!

It goes without saying climbing a mountain is mentally and physically demanding. I think the real key here is understanding that our minds will want to give up way before our bodies need to. And by all accounts when used correctly our minds can push our bodies when the body really does need to stop.

How many times have you put off doing those important tasks because you don’t quite feel ready? We have all done it. When you are coming up against resistance with yourself and find yourself saying “I can’t do it”, you are lying to yourself, the truth is, you won’t do it. Get out of your own way and get it done. 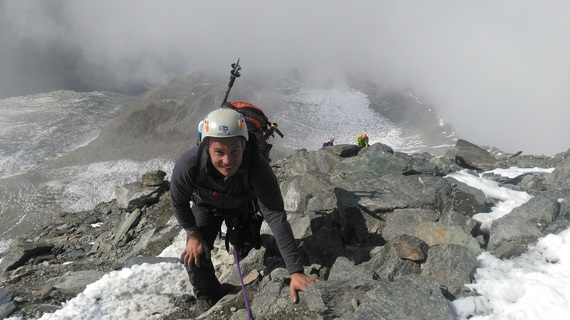 I’ve often said I don’t agree with the acronym “False Evidence Appearing Real” which is often seen layered over a stock image and posted on Instagram with 76,941 hashtags like #gogetter, #hustle etc because sometimes fear really is real and when you’re one miss placed step from certain death at 4000 metres traversing a ridge, it’s real alright.

My guide was a great guy who when he’s not guiding, teaches courses for people to overcome fear of climbing, I asked what his core principles are and he told me there’s four:

1. Breathe: Especially making sure that you are breathing slowly and exhaling.
2. Move: No matter how fast keep moving forward.
3. Fall: He said if you don’t experience falling then you will never push to higher levels. Once you know that falling isn’t so bad you build your confidence. In climbing you’re roped up, if you fall the worse that’s going to happen is a few bruises and a dented ego. In business its very much the same, it’s highly unlikely you’re going to die so what’s the worse that can happen?
4. Focus: Just focus on what you are doing, completely and utterly zone in on what you’re doing. In his words he said “one step at a time” in my worlds “plan for tomorrow but live for today”.

Reflecting what has been achieved

In today’s day and age of social media, it’s easy to constantly be comparing ourselves to others that have more and feel we are not enough on our journey through life because we haven’t achieved the outcome yet.

When you’re tired, there’s low oxygen, you have hardly eaten and have just been head down walking for hours on end there is a tendency to just keep looking at how far away you are from the summit still. I’m all for outcome thinking but every now and then stop and have a look over your shoulder and see how far you have come.

Keep going where others have failed

There’s something quite surreal when you guide tells that for the next traverse you need to “run for your life” due to the rocks that fall from overhead only to find out afterwards that 120+ people have died on that specific part of the climb but there’s something even more surreal.

It’s as you climb over rocks to see shrines in the form of plaques, photos, flowers and national flags. People have failed in the past trying to achieve what you are doing. Don’t allow their misfortunes to put you off, keep going where others have failed and if you can learn from their mistakes all the better. 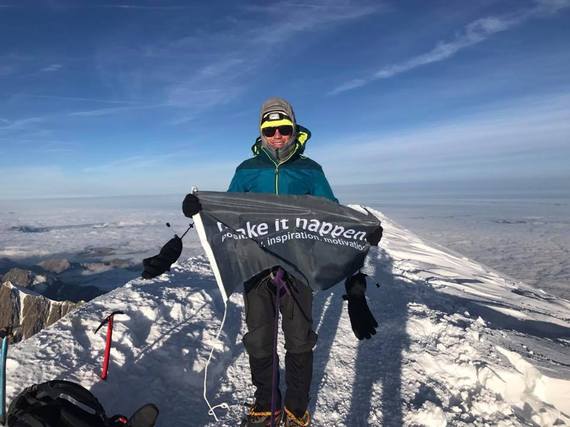 There are not many things that are worth achieving in life that you won’t experience some if not all of the above.

At 7.49am when I reached the summit my celebration was a hugging with my guide, a frozen mars bar and a powerade that was doing a slush puppy imitation. When we got down I opted for a good old-fashioned pint! You are willing to put yourself through so much to achieve a successful business so ensure that you celebrate your wins, it’s important.

Apply these 6 lessons to your life and see how you can make it happen.